On census day PLEASE don’t say you drive a Morris Minor unless you really do. Because then you’re forcing the rest of us into Morris Minors whether we like it or not. And a lot of us really don’t want to be forced into buying a Morris Minor just because most of the country SAY that’s what they drive. In reality most of them don’t drive at all any more, and really only take the odd lift in a Morris Minor at weddings, and funerals.

“On the question of religion the enumerators have been instructed to guide people to fill in the form to reflect their background rather than their current position. How does this help us plan for Ireland’s future?”

“I’ll use an analogy: imagine a survey on car ownership. The question “Do you have a car?” is not asked; the survey goes straight to “What type of car do you have?” And then, someone who has no car is encouraged to say they have a Morris Minor because, way back, it was the traditional family car. What use would this information be?”

I might have uttered similar mutterings before; people always talk about blogs in terms of the quality of writing and other such piffle that we won’t bother ourselves with today. A lot of my favourite blogs contain few words, and lot’s of other cool media, mostly photos and images but often videos and bits and pieces. I see some great images every day. Here’s a few great ones that popped in to my feed reader just in the last day or so. And funnily enough, not one of them is from the many great photoblogs I’m subscribed to.

A US soldier patrols in a pomegranate orchard in Afghanistan 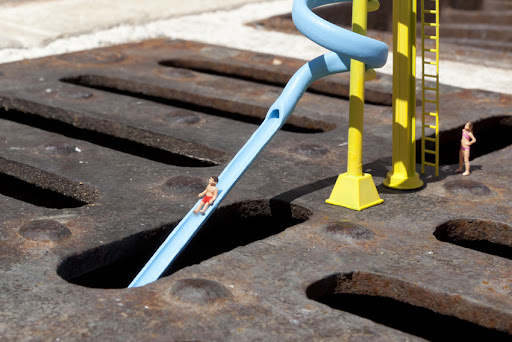 The pain of watching non geeks use a computer… 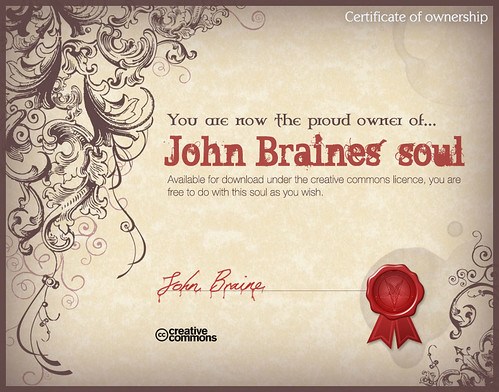 Hallelujah! It’s official. The final piece of documentation has arrived. “Dear Mr. Braine, I wish to inform you that your request to cease from membership of the Catholic Church by a formal act of defection has been recognised”.

I feel I should mark the occasion. Bookend the event with a special ceremony. An unwrite of passage. I know, I’ll buy an uncommunion suit and call around to my friends and neighbours, giving them cards with money inside so they can feel part of the celebration.

Or maybe just hold on to the money and drop into Cumiskey’s for a pint.

A friend of mine became a hero when he told me the lengths he went to to officially leave the catholic church years ago. That makes it sound like he was a priest. Nope, the Church still count you as a catholic, regardless of the fact you have since started writing atheist, jew or jedi on your census form.

To be no longer counted as a catholic he had to jump through several hoops, being passed up the ranks from one dog collar to the next and eventually to an archbishop or bishop who told him to come back when he was 16, which he did, and eventually got stricken from the records!

Well now there’s a new web site to make the whole process much easier. Whoever set this up, you’re my new hero;

p.s. Have a think about the notion that they deemed him to young to make that decision at first. The hypocracy is stunning.

I can’t believe this only has 1000 or so views on youtube. Everyone should see this.  Michael O’Brien unleashes a heartfelt anger on questions and answers expressing the rage that the nation are feeling. I don’t think I could do this issue justice without resorting to spitting, fuming and cursing. I am absolutely outraged at every aspect of this. How does one organise a nationwide march? How the goverment and The Catholic Church in Ireland are dealing this will place them in history alongside the Holocaust.

I got the email below today. I wouldn’t give this the time of day and I couldn’t be arsed retorting but for the last line; too funny not to share. It’s the fine details that separate the common garden nutjob from the full blown total nutjob. I have exactly three weeks to decide.

The missus has been invited on to Seoige today to debate with David Quinn of The Iona Institute about FertilityCare, a fertility clinic in Galway, who only treat married couples.

Only in Ireland can you get away with religious morals to discriminate against people with physical impairments.

No doubt they’ll crank out some statistics about the kind of home married couples provide for children. Like this one:

I’m so sick of idiots cranking out statistics while completely missing how irrelevant they can be. You can not take a statistic based on the general population and compare it to people in a very specific situation. A couple putting themselves through the pain, anguish, disappointment, crippling costs, and physical and mental intrusion of fertility treatment, make a far bigger commitment to a child than the ideal of marriage. People who are willing to go through this ordeal to have a child can in no way compared to a general populace who for whatever reason aren’t married and may or may not even wanted to conceive.

Bill O’Reilly is one of the most detestable characters I’ve ever come across. Surely you’ve seen him being a total dick about an autocue, or being hostile to many guests. See this clip from Outfoxed for a prime example. I’ve seen many more like it. He’s a vile bullying pathetic excuse for a human who managed to get some power. Now I just stumbled across my hero Dawkins being interviewed by him. It’s like my love/hate worlds have collided, though O’Reilly just about manages to be civil, so there’s nothing majorly exciting about the clip. Though I love Dawkin’s little laugh at the idea that tides couldn’t possible be explained by anything other than a deity.

What a plank. I’m going to arm myself with one hundred quid and go looking for him. As soon as he starts I’m going to stand up and say “I’ll give 100 euro to anyone who can prove they are a bad person by chucking this prick through a window.” I really hate these fuckers. Why do they think they have the right to invade our space with their self-righteous and wacky beliefs. They’re so fucking arrogant to assume they’ve found the only true path and have to push it on the rest of us. You can do whatever you want in your own church but keep away from me.

And here’s another thing, I often hear people saying that they don’t like Richard Dawkins because he’s just as preachy as the rest of them. Too fucking right I say. Give these planks a taste of their own medicine.