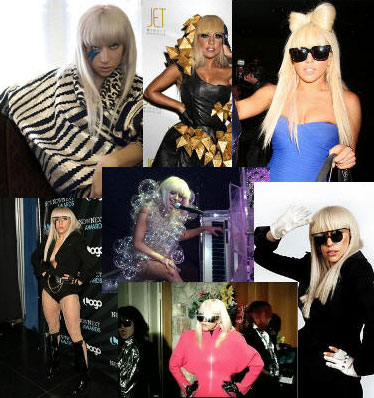 Have to hand it to Lady Gaga, she’s pulled the biggest trick in musical history and it doesn’t seem like the world has noticed. Maybe Sheena Easton would have noticed, she who sang “You got the look”, for that is the ruse; Gaga looks like a supercool New York hipster dripping with post-modern artyness, but she sounds like something you’d hear the kids on Lazytown singing, or any other kids tv, cheap, catchy, painful low com denom. The kind of sound you couldn’t fault a seven year old for loving; you smile at the little nippers as they sing along and dance, trying not to let the smile slip as slip behind the sofa and start hacking your ears off with a rusty saw that’s been under the hedge for eight years.

She’s that much of an earache. She’s on a musical par with Barbie Girl, The Rednex (cotton-eyed Joe) and Scooter.

Betty Boo and 2unlimited actually sound sophisticated next to Gaga.

But she looks like Queen Shiva of the Avante Guard elite, and seems to have fooled a million ears.  I don’t think we ever saw Barbie Girl on a Glastonbury stage. She’s probably even fooled her self. Good trick!

I really can't remember the last time I was so obsessed with an album, but...