Two of my favorite things share a common theme – bunnies! Donnie Darko and a book by Bill Drummond called 45. Ok, they’re called Echo and the Bunnymen, so the link to Donnie Darko is pretty obvious. But another subtle link is that in 45, Drummond (who managed the Bunnymen), becomes obsessed with the album cover for Crocodiles, because by pure coincidence, the tree in the background looks like a big bunny; but no-one else he shows it too can see it.

45 is an absolute gem, it’s autobiographical, but it’s more like a random diary of highly amusing events between his last book, 33, which he wrote when he was 33, and 45 which he wrote at… well done! Blue Peter badge for you. If you can see the connection here, you’ll expect another book at 75. 45 is full of boyish quests, poignant observations, and personal superstitions.

For some odd reason I’ve always had a lot more time for personal, made-up superstitions than I have for established ones (horoscopes, broken mirrors, god etc). One example of Drummond’s hokery pokery is his story about drawing a magical ley line across a UK map, somehow guided by the magnetic poles and somthing to do with Elvis, then making his way along this line by foot, while concocting his own soup, in various locations, for anyone who’s happy to eat it.

Anyway, chatting in work this morning, we were trying to remember the first track in the original Donnie Darko, and of course it’s The Killing Moon by Echo and the Bunnymen (a couple of minutes in, in the clip above). Of course because I saw this version first, I think it’s a much better opening track, than the one used for the editors cut (Never tear us apart by INXS) and almost as good as the school scene with Head over Heels by Tears for Fears. I can watch that scene over and over, it’s better than any music video, I’ll refrain from adding ‘ever’. These are the kind of films I love, where each scene can stand on it’s own as a great piece. Mullholland drive is chocka block with these. They’re especially potent when crafted around some enchanting music. Silencio! 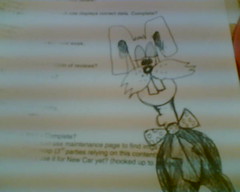 More bunny waffle; My standard doodle is a cartoon bunny. I get bored very easily, and I always want to be ‘doing’ something, so I fidget and doodle a lot at meetings etc. I’ve drawn this bunny hundreds of times. Annuvver fing is that I tend to get carried away with things that I get into. When I was 11 I got a rabbit. One year later I had a hundred foot compound, housing about 50 different rabbits, I mixed my own rabbit food which I sold to people who had previously bought rabbits from me, and I also sold rabbits to pet shops. I had special breeding bucks that were bred to sire litters of 12 or so, rather than a standard 5 or 6. I can honestly say I had more of a disposable income when I was 12 than I do now! I also had terrapins, mice, a single pigeon, budgies, guinea-pigs, koi, a hooded crow, and a gerbil city. They say pets can help teach kids a thing or two about life, the unverse and everything. I’ll say! I had to do some things that no 12 year old should have to experience, like mercy-killing sick rabbits and drowning baby gerbils born with no legs. And I still, very frequently, have dreams about rabbits burrowing their way out of the garden!

“You still wake up sometimes, don’t you Clarice? You wake up in the dark and hear the screaming of the lambs. “

What a load of waffle! So much for writing about web design.