I’ve pretty much given up novels in recent years. I’m a bit tired of fiction but I’ve recently got a great hunger for learning and information, not too uncommon in your thirties apparently. So I’ve been reading a lot of non fiction. Lots of art and design books. I just finished Leonardo Da Vinci: The Flights of the Mind. There’s a lot of Leonardo pap out there but this is a pretty thorough account of DaVinci’s life. But it was a bit too historical for me. I don’t really care where or when his mother was born or what she did – just get to the flying machines already! So, I did enjoy a lot of it but I found a lot of it pretty dry and it but it didn’t really hold my attention throughout. 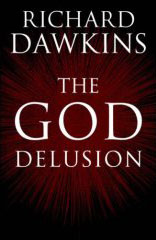 But then I got a The God Delusion, another well chosen present, thanks missus! and in comparison it was a really enjoyable and fascinating read. Iwasn’t really that bothered about getting it- I’m a strong Athiest so I didn’t really need the spiel. I also got the impression Richard Dawkins might be a bit of a tough read, but he’s a really down-to-earth, fascinating, funny, and entertaining writer. He expressed a lot of my thoughts on the subject with far greater lucidity than I. There’s also some really fascinating stuff about why people ‘do’ religion, some really primal psyche stuff. On top of all that it’s just pretty re-assuring, I didn’t need to be assured about my beliefs but sometimes I feel like I’m in invasion of the body snatchers or something and everyone I know has been taken over by alien beings which make them believe in the most ridiculous of things. So it’s re-assuring to be in such good company.

Although I’ve a lot of strong personal politics, I’m pretty apolitical when it comes to professional party politics, but I feel more than ever now that I’d like to be a more active Atheist. Its one thing that I feel very strongly about. If there’s one thing I’d mention when politicians knock on my door its the separation of church from state. There’s a list of Atheist organisations at the back of Dawkin’s book but nothing for Ireland. How shit is that?

Which reminds me, I came across a really good blog a while ago called pharyngula. I was searching for something completely unrelated and stumbled across it and ended up reading loads. It’s not a strictly atheist blog but definitely leans that way. So, considering I came upon it by chance I was amused to see Dawkins give it a few mentions. I really want to read a lot more Dawkin’s books now, maybe the Selfish Gene. Any recommendations? Anyone? Bueller? Bueller?