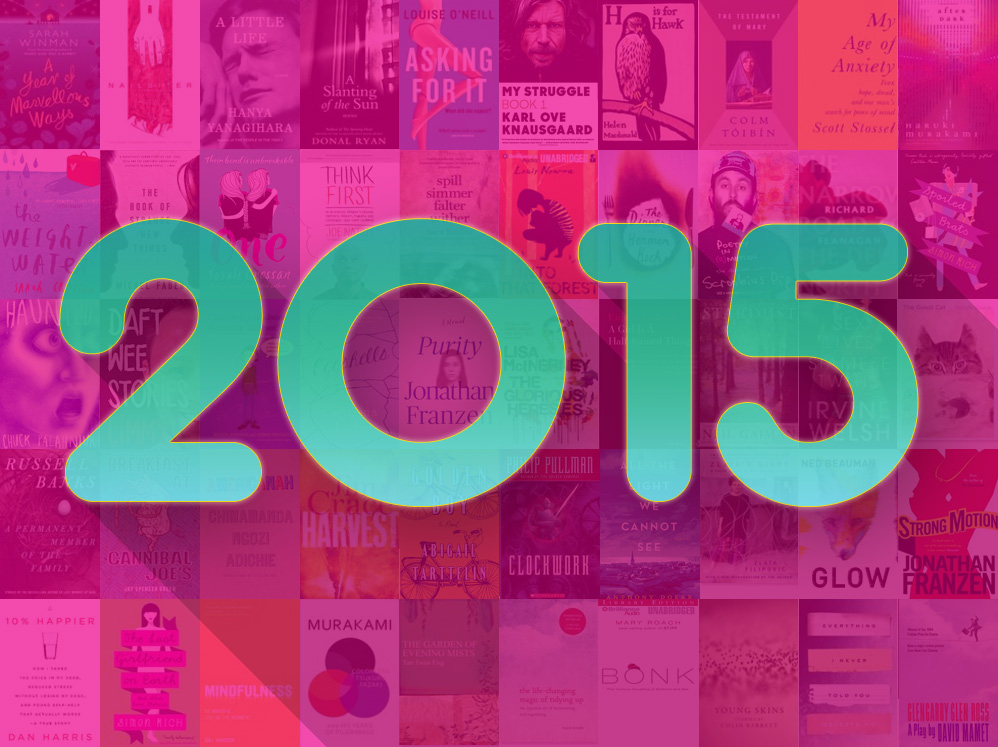 That was a great year for books. I’ve just finished my Goodreads challenge of reading 50 books in 2015. First time doing a challenge. It kept me on my toes. And I got to read a lot of amazing books: 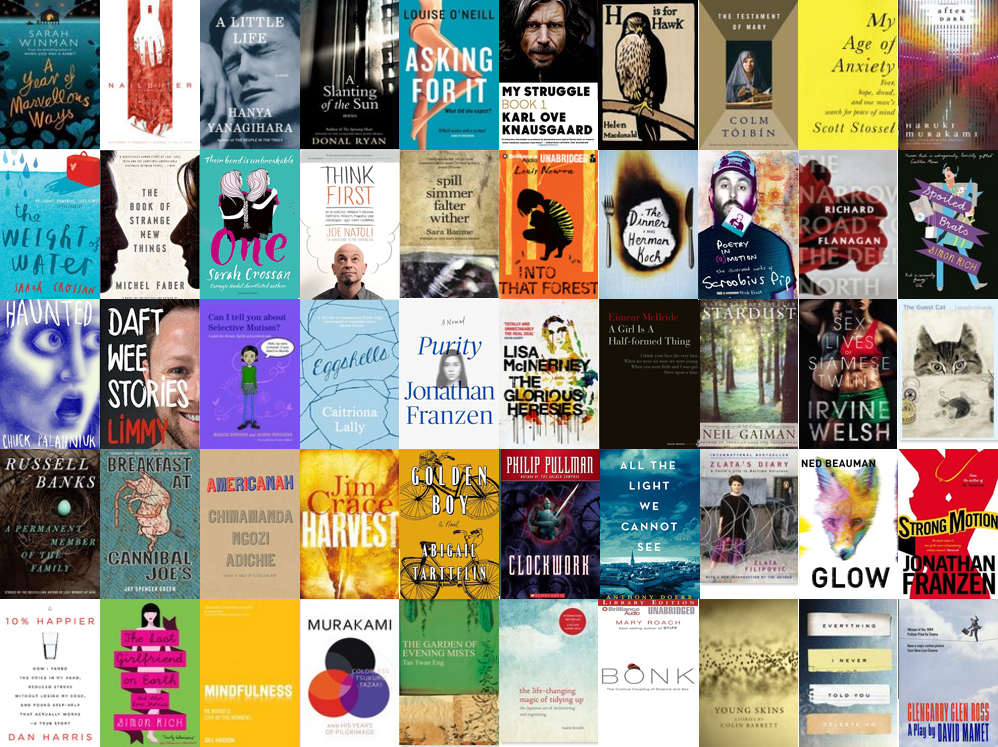 20 Female writers.  30 Male. ( I’m surprised it has ended as more male but that’s just how the cookie crumbled this year…. I think anyone who chooses books based on the sex of the author needs to wake the fuck up.)

23 Audiobooks, 22 Kindle (I think. looking at some covers, I just can’t quite remember )

2 on paper. Both Graphic;  pretty much the only paper I read these days.

Once again, some of the more interesting books are Narrative non-fiction, and sit somewhere between novels and non-fiction: H is for Hawk. My Age of Anxiety, My Struggle, The Guest Cat, and 10% Happier.

According to Goodreads, the most popular book I read this year was  “All the Light We Cannot See” which was one of the most disappointing reads of the year for me. It just didn’t work for me. “Narrow Road to the deep North” was a close second.

10% Happier
Dan Harris cuts through a lot of new age bullshit in a search of some self-help that genuinely works, and lands on the increasingly popular: mindfullness. I’m in.

Colorless Tsukuru Tazaki and His Years of Pilgrimage
Haruki Murakami delivers once again. A story that somehow brings to life the kind of flittering sub conscious thoughts and feelings that lurk in the back of your mind. This novel explores some typical Murakami themes; but in essence I think it’s mostly about guilt, sexual fantasies, and that space in between fantasy, reality, inner thoughts, and outer realities, ahem.

Spoiled Brats / Daft Wee Stories
A tie for these two books of short stories. Every top ten deserves a spot for some of the more light-hearted reads and both of these were great fun.

Asking for it
The cover and title put me off this book for a while, it seemed like a different kind of book to me. But I kept hearing it was great, and it was.  I found it very brave and clever in so many subtle ways, like having a character who could have been made more sympathetic in many places, but wasn’t. Which made her all the more real. And the point is none of that matters; rape is rape. Behaviour is irrelevant. Sex without consent is rape. End of. There are no fucking blurred lines.

Into That Forest
A unique story about two girls raised by Tasmanian tigers. Works great in audio; the narration is fantastic: an intriguing old lady telling you a story by a fire.

Spill Simmer Falter Wither
Another book where I almost didn’t. I worried that a book about a lonely man and his dog would be way too twee, but it never was. The fine writing was anything but twee.

Purity: A Novel
This is a funny one. It’s as solid Franzen as ever. A solid five stars. I can’t fault the rich fabric of the story or the wonderfully believable characters you always get with Franzen. Yet he seems to have lost a sense of fun that he had with The Corrections. But I still enjoyed every minute of it. There’s a great Mark Twain quote that came to mind while reading this: “Truth is stranger than fiction, but it is because Fiction is obliged to stick to possibilities; Truth isn’t.” i.e. Novelists often have to hold back on some of the weirdness because they can’t get away with it as easily as they could if they were writing non-fiction but in Purity, I think Franzen got the balance just right.

The Glorious Heresies
Another novel with a great story and believably flawed and nuanced characters. But this time we’re closer to home in the arse end of Cork.

A little Life
Isn’t that title a great joke? There’s nothing little about this book. Anyway, Hanya Yanagihara is right up there with my favourite gang of great contemporary American novelists now; Franzen, Eugenides, and Tartt. It starts off about five friends, but it’s really about one, a tortured mind, body and soul called Jude St.Francis. The writing is so good, you just know you’re in very fine hands from the very start. I thought it might be over hyped but it’s as good as everyone is saying it is.

H is for Hawk
I just loved this book. I think it just about pipped it as book of the year for me. It’s about grief. It’s about a Hawk. It’s about trying to replace grief with a Hawk. In parts it’s also an autobiography of another Hawker. It’s about mental health. It’s about connecting with another soul. It’s about life. It’s about everything in between. Written with such charm, intrigue, and intelligence.  I’ve very fond memories from the summer, sitting in Stephen’s green with this book at lunchtime, and such fine company it was.