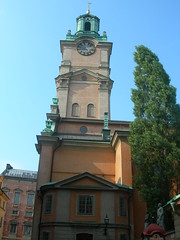 What a great place Stockholm is. There’s no big wow factor but you start to notice small things. No traffic. Kids free everywhere. Everybody very polite, not to mention brown-skinned, blue eyed and blonde. Get this, in Sweden, a couple can take up to 13 months off work between them, with the state paying 80% of the wages. And a lot of companies will pay all expenses for adoption! Not that we experienced this over the weekend. A father gets two ‘Daddy months’ off work. That’s it I’m moving to Sweden and having three children a year. I’m hoping polygamy is also encouraged.

Didn’t do too much tourist stuff although we did go to skansen. Basically it’s a big park full of stuff, open air museams, a zoo, play areas, farms etc. Mostly we hung around some of the great public spaces in Sweden. 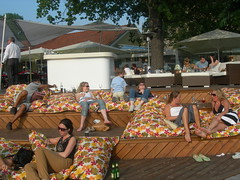 The first night we just needed to pop across the road to a lovely lake, where we lay in the grass and sipped some cans, with a Jazz band in the corner, people playing frisbee and some Swedish block game, while black bunnies fluffily hopped around! Didn’t know there was such a thing as wild black rabbits. Stumbled upon this place on the right after Skansen and just lazed around in beanbags listening to deep house for hours. 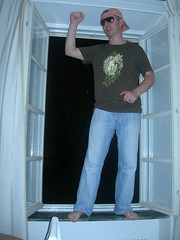 There’s some funny licensing laws in Sweden that meant we had to go to an off-license before a particular time on a particular day and buy all our drink for the weekend. I got a bit carried away and got lured by lots of strange coloured bottles with sickly sweet liquids. As you can imagine we drank the whole lot on the first night and ended up doing lots of silly dancing. But when the girls insisted on ABBA, I took a running jump through the window and ended up sitting on a branch overhanging the lake, which surprisingly didn’t end in disaster. I swear if we were on the tenth floor rather then the first I still would have jumped. I’ve grown to appreciate the fact that ABBA have some very intricate arrangements and are quite talented and all that – but I still hate them!